Other photos in Bardia near our Hotel Al-Burdi at seaside at mouth of main wadi (lower Bardia).

It took 4 hours to cross from Egypt to Libya, very interesting. Our time at the border was as reasonable as one could expect where we changed coaches, drivers and guides. We also picked up our armed escort who will stay with us during our time here.

Prior to crossing the border we passed through Sidi Barrani, the scene of the first victories by the Western Desert Force as they broke through the weak rear defences of the Italian Boxes. The Italians had lost 38,000 prisoners including 4 Generals in this action. The only time that the Italians advanced past Sidi Barrani was after the Battle of Gazala when they were part of Rommel's forces as he headed towards Suez.

We then proceeded into Bardia near point of 'break in' by 16 Bde.

We went down the new road to the harbour, following check in, John and Graham walked up the main wadi to where 2/2 Bn came down the wadi to take the town.

While up the wadi, they found a supply tunnel cut into the base of the western side of the wadi. An Italian steel helmet was found and handed into the hotel.

We had a good evening meal in hotel. Tobruk tomorrow. 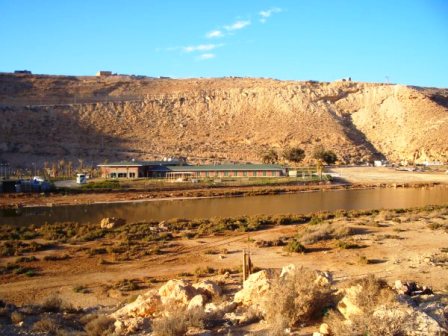 Unless otherwise noted battle and battlefield descriptions are prepared jointly by the Military History Tours Historians, as are the photographs.