Today we visited Magersfontein, site of the black week battle where Generals Cronje and De la Rey used innovative tactics that exploited the advantage of their rifles to foil the intent of Lieutenant-General Lord Methuen's thrust to release Cecil Rhodes then Colonel Baden-Powell from captivity by relieving first Kimberly, then Mahikeng. We drove in on the road that sort of follows the route French took to relieve Kimberly, French actually took a route some distance to the east that does not have a road. That, I'm afraid is where you would find the valley of the Lancers. Just before we reached the feature, we inspected the striking memorial to the Boers and one Scottish trumpeter.

On the Magersfontein feature we first visited the relief model with its view of the battlefield and the lint of white stones that mark so well where the effective Boer trenches were situated. The battle explained, we moved to the Museum where we marvelled at the collection and audio-visual experience. The willing then climbed to the crest and its striking Celtic cross memorial.

The café then provided us with an excellent cup of tea or coffee.

On the way out, we drove toward the Scandinavian Monument to those Norse volunteers who lost their lives fighting on the Boer side. With road conditions stopping our bus, the willing then made a further treck and climb, a Fitbit total of eight kilometres and 19 floors for the day. The monument was well worth the effort.

Lunch was had at our hotel was followed by a visit to the Kimberly Big Hole, quite an experience. 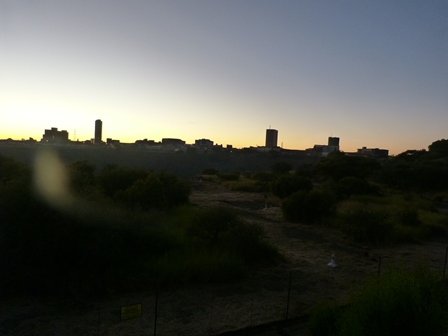