Some pleasant surprises today: the morning fog dissipated to a sunny day, the Mahikeng Museum was open and the sites we visited had been cleaned up.

We headed west on the N4 from Pretoria, by passing Rustenburg we reached Koster River, site of a sad page in our nation's military history. We saw the ground where the ill feted column of Australian Bushmen was ambushed, noted the river channel, the only cover, and the open ground where Boer sniping took its toll. There we took another soil sample for the New South Wales War Memorial, Ross assisted by Mary Jane did the honours.

Further along the N4 we stopped just short of the town of Swartruggens, site of the Elands River Staging Post, the incident where the performance of Australian troops caused Conan Doyle to wax lyrical. We discussed what happened and visited the memorials. One of the memorials was to the native Africans who lost their lives, we were able to get a photo of Pheelo with the memorial. After visiting the well-preserved graves of those who had fallen, we took another soil sample. This time the honours were again done by Ross who had ancestors at this and the Koster River engagements directed by Pheelo. The fact that the site was cleaned-up was impressive.

Thence to Zeerust Boer War cemetery, again in excellent condition, and where Ross was able to find the graves of two men from Ryalstone New South Wales.

Finally we reached Mahikeng (once Mafeking). There, in spite of reports on Trip Adviser to the contrary the refurbished Museum was open, had pleasant and helpful staff and had its exhibits in good order. The visit was a grand experience and very worthwhile as the photos attest.

Our wild goose chase of the day was the search for Game Tree Fort, site of the only assault Baden-Powell organised during the Siege. We went to the place described in the references but found no sign of the blockhouse described. We can only assume it was destroyed to allow for industrial development. The consolation was to find a grave in Mahikeng cemetery of a soldier that died in the Game Tree Fort engagement.

An early night tonight 0800 departure, tomorrow we have a long drive to Kimberley via Paardeberg. 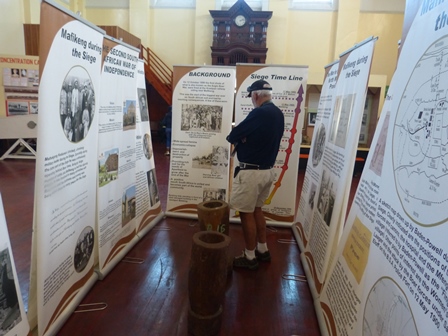