Our final day on tour started when we visited the Rifle Brigade Museum in Winchester as an extra before we headed off towards London via Brooklands Museum. The Rifle Brigade Museum had a special display centred on the battle of Waterloo. An excellent display that showed the battle in a diorama which I have showed and also many artefacts including two Eagle Guidons of the French, captured by the British Force under Wellington.

After leaving the Museum we made our way to Brooklands. Brooklands is a wonderful Museum located on the Brooklands racing circuit which was established after the First World War. The race track was a ramped track and half of it is still there. There is also a display of the racing cars who had raced at the venue. Some of these old racers still compete on special days.

There are other classic cars on display and one, a Napier built in 1911, yellow car in the photos, was the type of car that was used as a staff car for the RAF in the First World War. There are also some individual planes on display and include the only Wellington Bomber, fished out of Loch Lomond and the Vimy, Concorde and many others.

There is also a full display of most of the transport of London over the years. We left this wonderful display and headed to our hotel in London. When arriving in London, it was sad to say good bye to Ray, our driver, as he had been a major influence on our touring plan.

After breakfast tomorrow, we all go our own ways following a most successful tour. 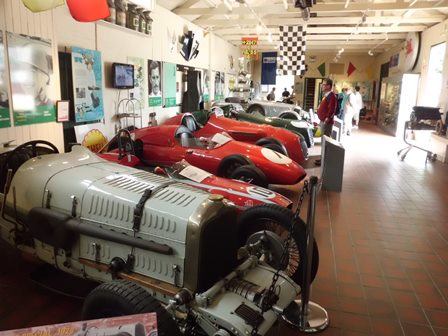