Well, we hit the road this morning and headed off on our adventure to the Museums and airfields from where Australians set off on those dangerous missions in WW2. Richard, our driver from City Circle Coach Company arrived early and we were then able to gather, check out and leave our Heathrow hotel prior to our programmed time.

We headed off to Hendon Museum, the location of the first airfield in the UK but now only a magnificent museum, where we were met by Mr David Keen, the Access Development Manager who gave us a welcome and briefing before we headed off into the Museum. 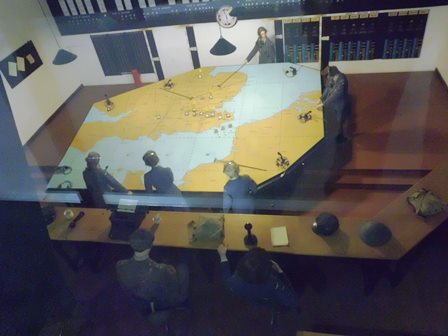 As the Battle of Briton display, with the aircraft from both sides now on display, I will concentrate on including those aircraft in my report.

The aircraft on display included the Stuka, ME 109, Heikell, JU 80, ME 110 on the German side and Beauforts, Hurricanes, Spitfires, Fairy Battles and Beaufighters on the UK side.

The shots that I was able to obtain are thanks to KT from the RAF Hendon Museum Public Support Staff. Than you KT!!

We dragged ourselves away as we needed to move on to Bedford for a 3 night stay. On the way we dropped into Cardigan for a view of the hangers for R109 and R110 airships. These hangers are being refurbished and I hope to be able to get a closer view in the future. We arrived into the Swan Hotel in Bedford and prepared for dinner.

Tomorrow we visit the Shutlleworth Collection and the 360 US Bomber Group Museum.