After breakfast at 0630, we assembled at the front of the hotel at 0800 where we meet the representatives of Kabaira Dive led by Ellie. We walked down to the beach below our hotel. Kabaira Dive had two banana boats pulled into the beach. After removing our footwear and rolling up our pants, we climbed into the two boats. Ray had decided not to come, because as an old sailor; he said he had seen enough waves. Ian had been diving with Kabaira Dive in the week before we arrived, so it a reunion for him.

Our first point of interest to see was Kabakaul where the landing had occurred in 1914. This is where our first minor misunderstanding occurred. The locals called 'Kabakaul' what we know as Cape Gazelle, the banana boats reached about 250 metres short of Cape Gazelle before we had to turn back because of rising wind and waves. Then one of the banana boats had a fuel system problem; it had emptied the petrol tank. After waiting until the engine had cooled down, a full petrol tank was connected and it was back in service.

The banana boats were rugged boats each powered by a 115 HP motor. There was a crew of two to each boat. Each boat held an 'esky' containing bottled water and lamingtons; these were produced at suitable quiet times. The boats were fast but spray and waves came in at times. When crossing waves, the boats bottomed out with a bump, bump.

We sorted out the navigational issues and came into the pier at Kabakaul. Since 1914 it has been lengthened and widened a number of times. The aim of coming to Kabakaul was to get a view of the beach approaching from the sea. The view from the banana boats would have been at the same height as the view from the boats being rowed towards the shore in 1914. A number of local boys were swimming and snorkelling in the bay. It looked a better option than school that morning.

We motored over the wreck of a Zero that was only a few metres below in the clear water.

Then we headed to Praed Point. Travelling with the current and the wind across Blanche Bay, the trip was smooth. After reaching Praed Point, we cruised along the shore line towards Matupi Harbour. The boat crew explained how the locals burrow almost 2 metres deep into the sands to look for megapode eggs. We passed Sulphur Point and into Matupi Harbour. We cruised around Matupi Harbour and saw the south eastern end of the abandoned Lakunai airport. On the side of Matupi (Tuvurvur) Volcano all the shrubs had been killed and were now brown after the eruption 15 days before. Steam was issuing from two vents in the volcano. Large yellow/white patches of elemental sulphur could be seen inside the upper rim of the volcano. Remains of coastal and antiaircraft guns could be seen on the hill sides and shore line.

We continued our cruise around Matupi Island into the eastern side of Simpson Harbour. Matupi Island is now connected to the mainland. We passed the north western end of the Lakunai airport before reaching Sulphur Creek. Although Rabaul as a town has had it, the ships still anchor or moor at the wharfs around the edge of Simpson Harbour as it is the most protected area. There are two tank farms in Rabaul, one for coconut oil and one for petroleum fuels.

HMAS Yarra was moored at Rabaul.

We travelled around the shore line of Simpson Harbour to the beaches north of Vulcan. We closely examined the beach area where A Company of 2/22 Battalion defended. We then passed Raluana Point into Karavia Bay. We could see some of the Japanese tunnels besides the Kokopo-Rabaul road. The remains of the floating crane were on the edge of the bay. The floating crane had been taken from Singapore by the Japanese and towed to Blanche Bay. The Allied air forces destroyed it before it could be used. The roughness and steepness of the country from the water's edge at the points where the Japanese landed in the dark to the tops of the ridges where they climbed showed the standard of training that 144 Regiment had achieved.

We then headed back to the beach at Kokopo where we landed and farewelled the banana boats.

After lunch we headed off for a four hour mini bus trip. It was raining intermittently. We firstly drove to Kabakaul to the pier that we had seen from the water in the morning. From the Kabakaul pier we drove up the road to Bita Paka then along the ridgeline road to Toma. The ridge road condition varied from poor to worse. At the Toma lookout we had a panoramic view to the south stretching to the Baining Mountains.

We drove past the abandoned Vunakanau airstrip to the 'coast watchers' lookout. There was a good restricted view of part of Blanche Bay; the trees most likely have grown since WW2. About 200 metres away we visited the site of the Area AA Command HQ, there was a 6" gun and a 3 barrelled AA gun.

From the high lands we drove down to the Kokopo - Rabaul 'road' and along to the Japanese barge tunnel off Karavia Bay. The tunnel is now about 300 metres from the water's edge. Portable sections of light rail were laid when the barges were to be moved from the tunnels to the water or back into the tunnels. The portable rail was like the portable rail that used to be used in the Australian sugar cane fields. There are five barges in the tunnel. The barges are in very poor condition and are rusting away. An attempt to develop the tunnel for tourism has started but appeared to have stopped. The rails in the floor have been cemented over and a partial viewing platform has been built over the second barge. The tunnels were dug by prisoners of war mainly Indian. The barges were also winched and hauled by the POWs.

We drove back to Kokopo for dinner. 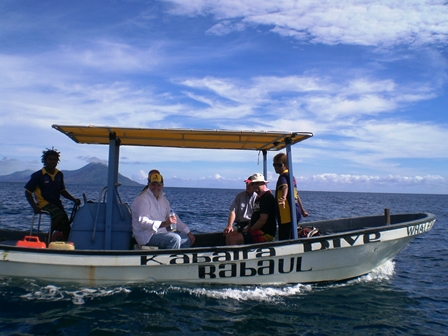 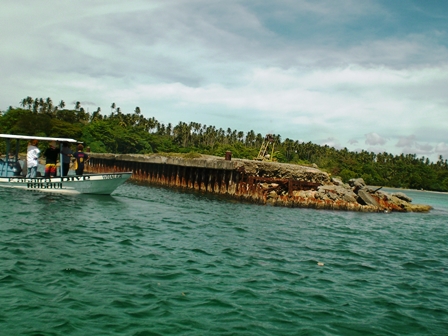 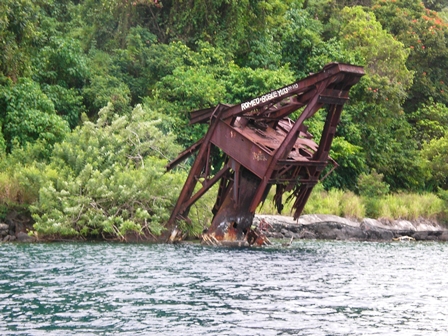 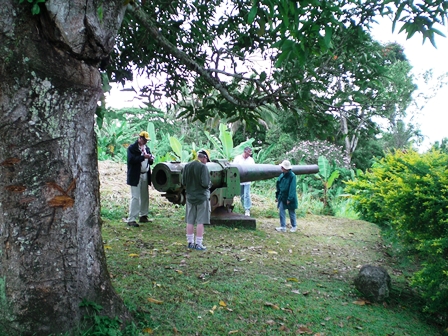