A day of great interest. We headed out early from our hotel, a slot had been booked for our service at the Nek, 0930. Yavuz had planned effectively, our bus had spent the night in a car park at Eceabat, so all we had to do was walk to the ferry, about 50 metres from our hotel then join the bus at the other side.

At the Nek we remembered John Hall's uncle, Louis Griffin. Louis was a farm hand from Townsville who had served in the 4th Queensland Imperial Bushmen during the Boer War, surviving Rhenosterkop. He had initially enlisted with 9 Bn in August 1914, then transferred to the 8th Light Horse in October. Reported missing in action on 7 August 1915, he was one of the 154 8 LH and 80 10 LH to die in the charge 100 years ago to the day.

From the Nek we walked down to a lookout on the rim of Monash Valley where a mackine gun had been sited to protect the valley from Turkish incursion.

Reserve Gully where troops were rested between operations, still devoid of foliage as it would have been in 1915 it makes a stark contract to the surrounding greenery.

Then to the Walker's ridge cemetery to see some of the grave markers with poignant messages.

We then walked up to Pope's Post, walking through the close scrub to be where B Squadron 1st Light Horse 100 years ago today set out to attack the Turkish chessboard of trenches on the next ridge. We were then moved when David Hooper, currently Squadron Sergeant Major of B Squadron 1st/15th Royal New South Wales Lancers successor unit to the 1 LH, read the story of Sergeant Russell who died in the battle. You too can be moved by hearing David's address below, just activate the video button.

A tour of the Turkish 57th Regiment Memorial then back to Eceabat for lunch.

After lunch we returned to Lone Pine where those of us with relatives commemorated on the wall were able to find them. Thence to the 4th Bn Parade Ground cemetery and Quinn's Post. We were back to our hotel a bit earlier than usual a tad worn by the exercise.

Tomorrow we will visit Shell Green, experience the battle simulations at the Gaba Tepe Museum then be at the official New Zealand commemoration. 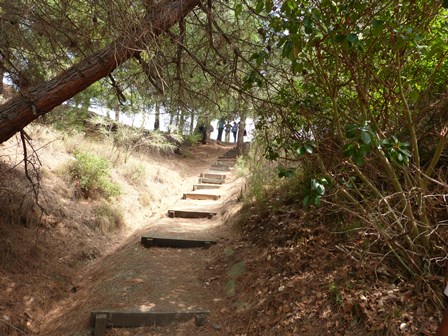