An early start as I ferry arrived into Pirreus Harbour at 0600 and we were met by Tassos and taken to breakfast in a hotel in town before heading south to Corinth. Our first stop was at the Corinth Canal which cuts through the Isthmus to the Gulf of Corinth. This saves a 210 kilometre trip around the bottom of the Peloponnese.

A coffee break and on the road again. This time we diverted to see the ancient city of Corinth and the Temple of Apollo, period 800 to 600BC. Continuing we then visited the older city of Mycenae with its high walls, period 1400 to 1300 BC. This city was the home of Agamemnon who led the Greeks to Troy to get his daughter Helen back as she had been kidnapped by Paris.

Ancient history now took a back seat as we moved further south the Navpion, one of the evacuation beaches and from here11, 200 men were evacuated. A beautiful city especially in the old town with its narrow streets and Venetian architecture. Lunch in Navplion and then further south to Kalamatta but not before we had a flat tyre in the mountains above the plain from where we had left Navplion.

Ken and Adrian's father was one of the fortunate members of the force to be evacuated from here where 8000 were left on the beach and many had to surrender as the Germans closed in. Many however took to the hills and many were then taken off by Destroyers or submarines over the next 2 years. That is a story in its own right.

On to Olympia where we will be staying 2 nights but tomorrow we will be visiting the original site of the Olympic games. 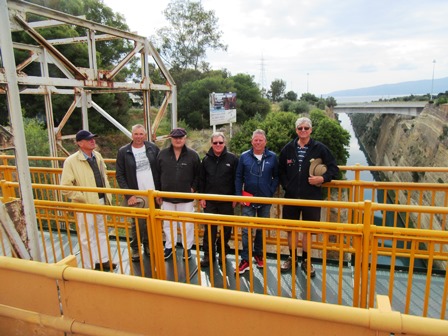