Sadly this was the last full day of the tour for tonight we board the ferry at Heraklion for the overnight to Athens, breakfast in the Metropolitan Hotel and on to the airport. Seven are leaving on the 12th so they will have an extra day in Athens. The remainder move on and some are actually heading for home and a well-deserved rest as they have participated in an excellent tour, with a great group of people and with many surprises on the way.

In the morning, with all our luggage stowed under the coach we headed down the picturesque highway with the oleanders bordering the road, to Heraklion for our last full day. We first visited the Knossos Palace where Ellena took us through the layout and history of the Minoan Civilisation. A very informative time was had by all and then we boarded the coach to visit the site where General Kreiber, Commandant of all German troops on Crete was abducted by and SOE group supported by Cretan Partisans. The memorial depicts the 'Broken Axis'.

Our next very important stop was to the area of the Charlies near the airport where the 2/4th Bn was located during the battle there in May 1941. The best location from where to view the area of that battle is at the church on the landward Charlie. We proceeded there and following a complete discussion on the battle, won by the Allies and at a terrible loss to the Germans as the cream of their parachutes regiments were destroyed by the defenders. While there we again met the Priest who resides at the church and following a special service for those lost in the action, with a small wreath laying and the playing of the last post we made a presentation of a 2/4 Battalion plaque to the church. A very moving moment for our priest and our group.

We then gathered to drink a toast to all those who paid the supreme sacrifice and to those who survived but have been lost since. He has an issue with the local council and upon our return to Australia, we will be lobbying the visiting Hellenic Armed Forces representative, Consul General and Ambassador to support the Priest's efforts to retain the site for the church.

I stood on the eastern side of the hill and took some photos that showed the position of B Company, D Company and the Bn HQ. The hill itself was in the A Company position. There are not that many locations in Greece or Crete where one can place the companies on the ground and then discuss the action. The church must stay in place for the future visitors to this great country.

We finished the day with an excellent visit to the Historical Museum of Crete where as well as the Venetian and Byzantine History they have a whole floor devoted to the Battle of Greece and Crete and the aftermath that the citizens of Crete suffered at the hands of the Germans. A wonderful way to conclude the historical aspect of our tour before our dinner and move to the ferry. 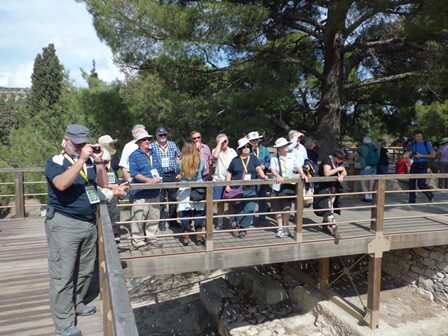