Today was spent battle site touring. We went different ways. Some tour members wished to return to the site of yesterday's commemoration to see the sites without the crowds and controls. The rest headed for Bullecourt where Graham described the 1917 battle and the unfortunate result. Then to Beaumont Hamel, John had described the Newfoundlander's battle en route, when we got to the site we were able to follow our own tracks and take in the memorial sites with the help of the young Canadian student guides.

A sort drive to Delville Wood where John again described the conflict on the way. Luncheon, an excellent packed repast was had in the treed grounds adjacent the kiosk. The group then trouped down to the impressive memorial and Museum. Again student guides imparted their knowledge, this time from South Africa completing Uni degrees and serving in the South African Army Reserve. They are well chosen highly erudite future leaders of their country.

Thence to Mont St Quentin, only short stop to view the memorial; the story was to be told in an interactive manner in the Historial de la Grande Guerre, Péronne, our next stop. There both groups came together. After our visit to the Historial, the Band led us to the Maire where we were welcomed by the town.

Dinner, was in the Historial. A big day, most were in bed early. 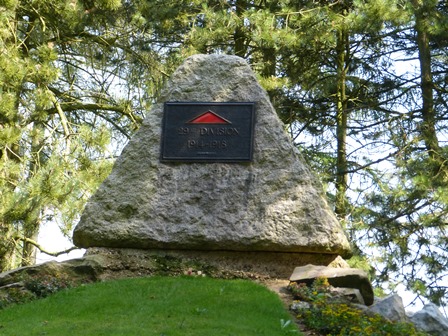