As you would be aware, we arrived late into York last evening, had dinner then retired for the night. But, we awoke refreshed and were able to view some of this beautiful city early which gave us a glimpse of what was to come later in the day. Due to the necessary rotation of drivers, we had Michael travelling as a member of our group today with Shaun the driver for 2 days. So, firstly, we set off to Elvington to visit the Yorkshire Air Museum.

The Museum is located on the site of former RAF Elvington, a World War 2 airfield used extensively by Allied bomber crews during the War. It is one of the largest independent aviation museums in the UK. It has over 60 aircraft and vehicles on display and the only Halifax Bomber in Europe. During the War there were 2 Free French Squadrons operating from here and due to that history, the French Government has given the Museum a Mirage Bomber, the only one outside of France. It is nearly twice as big as its young fighter brother but also had a Mach speed of 2.2. A formidable aircraft. As well as the aircraft there are some wonderful displays and the most memorable is the Bomber Command display. This display takes you right through from the start of the life of the strategic bomber from the First World War up until the end of World War 2. It also delves into the day to day life on a Bomber base including the maintenance, mission preparation and repair and recovery follow the mission's return.

Following our visit in this most peaceful country setting we returned to York for the rest of the day was free to venture into this wonderful city. This was easy as our hotel is located within the wall on this ancient town. Much to see, from the beautiful York Minster to the famous Shambles with its little shops and Tea Rooms and more in between. The booklet put out by York Tourism is jam packed with different things to enjoy. I have included a few of the sites one can see here while walking through the old city, which was developed by the Romans but the area was occupied many years before the Romans arrived. A relaxing day was had by all. Tomorrow we start our run south and will make our way to the Petwood Hotel, the home of the Dambusters. 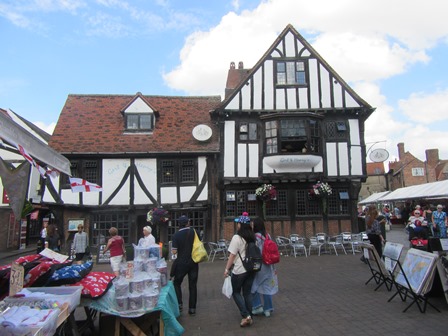