This was quite a big day that had many bumps and turns. We headed out at 0915 as we were expected at the most Northern Border Post of the Greek Army at Niki at 1000 and it was only a 30 Min trip from our hotel so we pulled up short and waited until the time to arrive.

We arrived right on time to be met by the Commander, his Second-in-Command, the Bandmaster and a squad of soldiers. We were well received indeed and the hospitality shown to us was of the highest order. The Commander spoke and welcomed us but added that he was very pleased that we did venture further north to visit them and they really appreciated our effort.

We had a full briefing of the history of the area and the Role of the Division that is stationed here. They were happy that it was fine weather as they have just come through a very bad winter with much rain. They have their problems with refugees but hand them over to the Police.

Many photos followed, special, group and presentation. We left them following refreshments and cake.

Not many kilometres from the outpost we visited a small village off the main road to Florina. On arrival we were met by the local dignitaries and shown the Church as it prepared for the Easter period. At the Church there was a memorial to those from the village who had been lost in both the 1912-22 War against the Turks and the 2nd World War. At this site we held a small ceremony and our Cornet player played the Greek National Anthem for the first time, all were most impressed. We were invited to attend the cafe in the village and to receive a gift of coffee, other drinks and food as a thank you for visiting the village and to celebrate Easter Thursday with them.

Our party went into the mountains to the village of Drosopigi where we had lunch in the small village hotel and many tried one of the local pies, stinging nettle pie. The village is new and built after the War as the Germans had come in 1944 and burnt the original village to the ground. The partisans had warned the villagers and all fled to the mountains, the old village was 1200 metres above sea level, so higher they went. There were a few very old people left who could not walk but the Germans killed them before burning the village. There were many such incidents during the occupation by the German Army, particularly at the end when they were done.

We finished our visit to Drosopigi with a viewing of their wonderful small museum.

We moved on then to Vevi where we walked the ground of that famous Battle at the very start of our encounter with Germany in Greece. The 2/8th, 2/4th, 2/3rd Field Regt, Dodecanese Regiment, 1/88th Greek Regt and others stood here to meet the German Division as it burst it's way out of Yugoslavia. Outnumbered and outgunned, the units put up an excellent show to keep the Germans at bay until the allotted withdrawal time. We had quite a few men taken prisoner here when the Germans pushed through where the Rangers had vacated. This allowed the Germans to cut off many of our men. The Rangers withdrew a distance before realising that the 2/8th had not been overrun and reformed in the Pass.

Both the 2/4th and 2/8th withdrew behind the feature and were then trucked to further holding positions a few miles south of the exit from the Pass. In the village there is a special memorial to the men of the 2/4th Bn who fought here during those dark days. 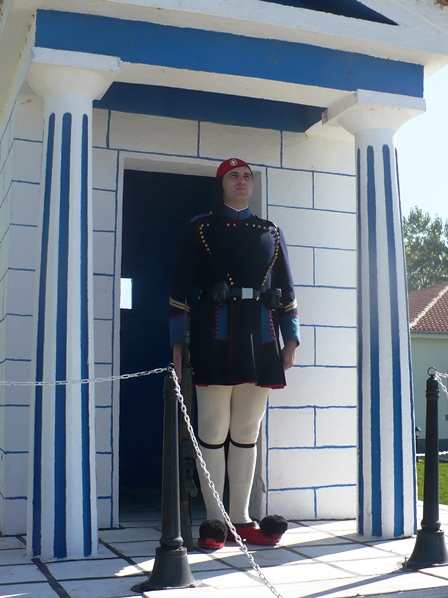 We proceeded through the Pass discussing the action and then stopped near the southern exit where a memorial had been erected by the Local Greek people to honour those lost in the Battle on the 12 April 1941. A small ceremony was conducted and we had the ladies on tour lay a wreath for all those mothers who had suffered after sending their sons off to War.

Tonight we will visit the Church in Florina to be part of the commencement of the Easter Celebrations.