After a day like today, you become convinced that every day you live you learn, especially when you are on a Military History Tour.

An early start, we wanted to be at Tzemach in the early morning light; about the time the 4 ALH Bde would have been mopping up final enemy resistance 99 years plus a day ago. The restored location afforded us a place to see where the action happened, it was described to us in detail. In the cool shade nearby we then discussed those on the tour who had ancestors who served with the light horse in Gallipoli, Egypt and Israel.

Back on the bus we learned about the organisation of the ANZAC forces in the campaign, and the successful raid to Amman.

Our path then took us to the Golan Heights and he Monument to the Israelis killed in battle on the Golan Heights was very moving. Our local guides, both veterans of the fighting gave us vivid descriptions of what happened in those dark days. We also got to meet some Israeli soldiers.

A short drive away we had shady lunch in the lunch room and grounds of a kibbutz. Full of food we were then given a presentation and shown a video on the six-day war in the 1960s, and how the Israeli Defence Force ensures the country's security today was explained.

Thereafter we visited a lookout where you could see Syria, and discussed the taking of Damascus. We even saw a sculpture of a bunyip and met some Australian UN border observers.

Back on the bus, we learned more about the Golan Heights and Sea of Gallilee. Some then swam in the sea's sweet water before another great meal, then early to bed for tomorrow - Jerusalem. 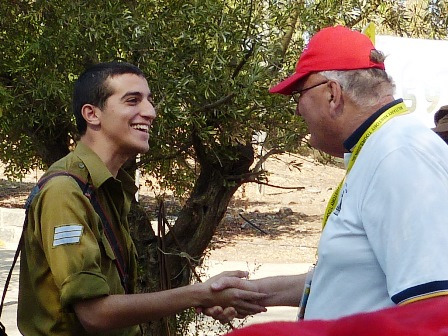